Acorn Naturalists
Share how you use this resource
$99.95
Item
KIT-20152
Add to Wish List Add to Compare
Email
Print this Page 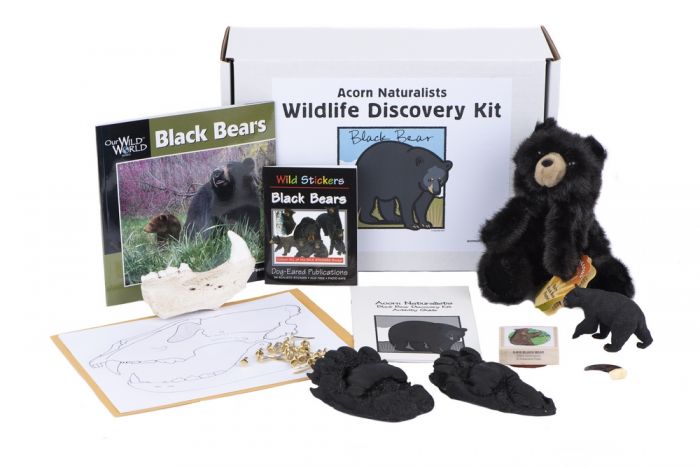 The American black bear is North America’s smallest and most common bear. It is most at home in a large forest where trees and shrubs provide cover, as well as fruits and nuts. Forests adjacent to wetlands and streams are best, since these habitats extend the bear’s menu to include tender shoots, grasses, fish, and water. Although it is classified as a carnivore, nearly 90% of a black bear’s diet is plant-based. A black bear is smaller than a brown bear and a polar bear, but it is still a massive animal. A typical male weighs between 300 and 400 lbs; a female can weigh up to 240 lbs. Standing on its hind legs, it can reach a height of five feet. This bear may be called a black bear, but its fur isn’t necessarily black. Sometimes it is cinnamon-brown, blond, or even white. Like other bears, a black bear is not a true hibernator. Instead, it enters a deep sleep during the winter. During this time, it does not eat (or urinate or defecate); instead, it relies on fat reserves to sustain itself for several months. When a black bear emerges from its den in the spring, it has lost substantial weight. Its focus turns toward eating and in the case of females, caring for cubs that were born in the winter den. Kit contents: puppet; black bear rubber stamp; book about bears; track, claw, and grizzly mandible replicas; bear model; Black Bear sticker book; blackline masters; set of brad fasteners; and a bear activity guide.